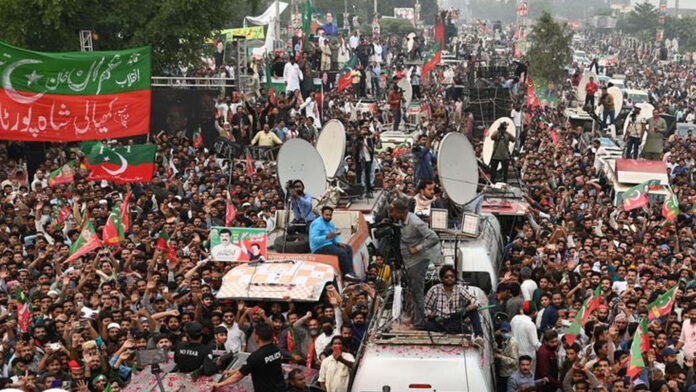 The party of Pakistan’s ex-Prime Minister Imran Khan has said he suffered minor injuries after a gunman opened fire at his convoy. While the gunman is in custody, no individual or group has claimed responsibility.

Imran Khan was slightly wounded Thursday after a man opened fire at a container truck the former Pakistani prime minister was riding on alongside his supporters.

Asad Umar, a party official, said Khan had been struck in the foot while traveling in the Wazirabad district of the eastern Punjab province almost 200 kilometers (120 miles) from Islamabad, the capital. Party spokesperson Fawad Chaudhry said a bullet hit Khan’s shin.

Khan was not seriously wounded, his camp said. Pakistan’s Interior Ministry reportedly opened an investigation into the incident.

The suspected gunman was apprehended following the shooting, though his identity had not been released to the public. No group or individual claimed responsibility for the incident.

What do we know about the incident?

“One man opened fire with an automatic weapon,” Umar said.

Another Khan aide, Raoof Hasan, told the AFP news agency, “This was an attempt to kill him, to assassinate him.”

At the time of the attack, Khan was traveling in a large convoy of cars and trucks toward Islamabad. Once in the capital, Khan hoped to place significant pressure on the government to call early elections.

Since being ousted in a no-confidence vote in the spring, Khan alleges that his removal was orchestrated by Prime Minister Shahbaz Sharif, his successor. Khan also blames Washington for his ouster.

Both Sharif and the US dispute Khan’s characterizations and Sharif has said he has no plans to hold elections prior to those scheduled for 2023.

Following the assault, Khan was spotted with a bandage above his foot after he was moved to another vehicle from the container truck. His party said several supporters were also wounded.

What is the political context in which the attempt on Khan’s life occurred?

The shooting occurred days after he began his trek from the capital of Punjab province, Lahore, alongside his supporters. The so-called “long march” Khan has orchestrated is in part a response to Pakistan’s electoral commission disqualifying Khan from holding office for five years.

Pakistan’s powerful military has said that while Khan has a democratic right to hold such rallies, no one will be permitted to destabilize the country.

Islamabad authorities have already bolstered the presence of security forces around the perimeter of the capital in an effort to stymie clashes and violence in advance.

Before entering politics, Khan was a famous cricket star.

STD-Meet.com Fosters an atmosphere Where Over one million Singles make relationships...