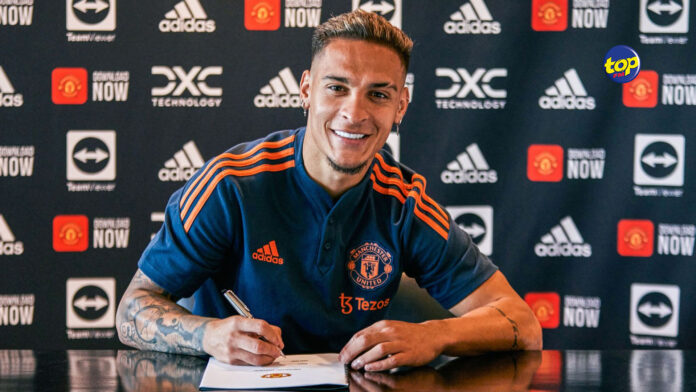 Former Ajax winger Antony becomes Man Utd’s fifth summer signing, and third from Eredivisie; Brazilian signs five-year contract with the option of an additional year; Antony: “This is an incredible moment in my career to be joining one of the most iconic clubs in the world”

Manchester United have completed the signing of Brazil winger Antony from Ajax for a fee of £86m.

The 22-year-old has signed a contract until 2027, with the option of an additional year, and is in line to make his home debut in Sunday’s televised Sky Sports clash with Arsenal.

The move to United sees Antony reunited with ex-Ajax boss Erik ten Hag, who has already recruited defender Lisandro Martinez from his former club, and Tyrell Malacia from Feyenoord.

Antony described the move as an “incredible moment” in his career, adding that he was relishing the opportunity to link up again with Ten Hag as well as his new team-mates.

“This is an incredible moment in my career to be joining one of the most iconic clubs in the world,” Antony said.

“My time at Ajax was fantastic and I will always be grateful for the trust they put in me, but now I am ready for the next challenge, and I can’t wait to join my new team-mates and play my part in bringing success to Manchester United.”

Manchester United football director John Murtough added: “Antony is one of the most exciting young talents in European football and has exactly the right profile for the attacking, dynamic team Erik is building.

“We have been especially impressed by his desire to join Manchester United, and to be part of a long-term project to get the club back to the levels of performance we all expect.”

Antony scored 25 goals in 82 club appearances for Ajax since joining, under Ten Hag’s reign, from Sao Paolo in 2020. He also has two goals and two assists in nine senior appearances for Brazil. He has won two Eredivisie titles, and a gold medal in the 2020 Summer Olympics.

Ahead of his Old Trafford move and with Ajax having rejected repeated bids from United, Antony reportedly refused to play in Ajax’s final two games as he looked to push through a Premier League move.

The Brazil winger also expressed his desire to leave publicly, through Italian football journalist Fabrizio Romano, as the two clubs thrashed out a fee.

Ajax manager Alfred Schreuder, who took over from Ten Hag this summer, said his behaviour had been “weird” and that he would have fined him had the player remained in the Netherlands beyond the summer deadline.

“It’s a shame it happened,” Schreuder said. “It’s bad. I think that’s weird. He was eventually addressed about that.

“I’m angry about it. I think, ‘You’re just a player. You just have to do your thing.’

“Absolutely, he could be fined. I don’t think it’s good that it’s possible [for him to behave like that] within our club.”

“For sure, we hope he will be the next star of Ajax.” It was July 2020 and Erik ten Hag, Ajax’s manager at the time, was introducing Antony, the club’s new £20m signing from Sao Paulo.

“We at Ajax are always trying to strive for the top,” added Ten Hag. “So I expect he will do his best to reach that level of expectation. The rest, we will see in the future.”

Ten Hag was right to expect big things of Antony – the Brazilian, only 19 when he agreed his move to Amsterdam, swiftly established himself as one of Ajax’s key players – but even he could not have predicted he might one day take him to Manchester United too.