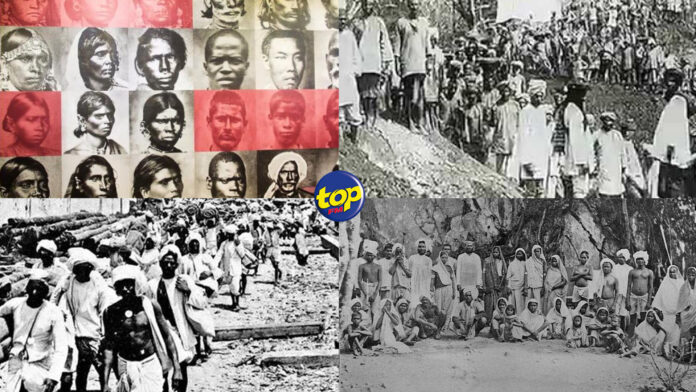 The Girmitiyas ([ndian coolies) endured their suffering and captured them in different ways. This bidesia, a deep lamentation, was composed in the sugarcane fields of Fiji by an unknown Girmitiya. It captures their helplessness, anguish, anxiety and pain.

Translated:
In the dark rooms (of the coolie lines), the nights are difficult to endure. Who do we tell the depth of our pains? Day and night of our lives are consumed in suffering. Tears have dried from our eyes.

Between 1834 and 1920, half-a-million indentured immigrants (labourers and their families) arrived on Mauritius, with 97% of the immigrants coming from India. The first labourers, called coolies, arrived from Calcutta (Kolkata) on November 2nd 1834.
The practice of indenture WAS ABOLISHED IN 1924.

In 1849 an immigration depot was built at Trou Fanfaron, Port Louis, where the coolies lived for two days before heading out to the sugar estates.

This holiday on the anniversary of that first arrival in 1834 celebrates the rich cultural heritage of the Indian population and their contribution to Mauritian society.